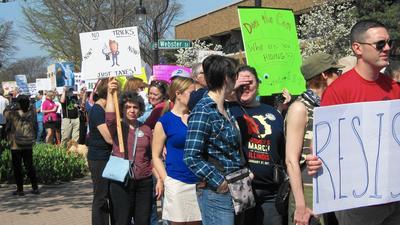 The big turnout for the peaceful assembly was no doubt aided by temperatures hovering around 80 degrees along with sightseeing tourists and shoppers strolling the Loop.”I think it was a huge success — we had a very energetic crowd,” said Taran Singh Brar, a lead organizer, whose idea for the protest led to a Facebook page that advertised the event to thousands. From there, dozens of left-center activist and union groups signed on to participate in the march.Paid Post WHAT’S THIS? Best Steakhouse in Every StateA Message from The Daily MealThe U.S. has great steakhouses from sea to shining sea, and we’re presenting the 51 best. Did your favorite make the cut?See MoreWhile Brar had hoped for a massive turnout to rival the 250,000 who attended Chicago’s women’s march, the California native and documentary filmmaker said he was overwhelmed by social media’s capability in drawing such a crowd.”This is my first time organizing something on this scale. I learned a lot. It was really an amazing event … we sent a really strong message.”Brar emceed the event, and with U.S. Reps. Jan Schakowsky and Mike Quigley looking on, performed the chicken dance as a brass band played behind him as a nod to Trump, whom opponents have derided as a “chicken” for not releasing his tax documents.

The Chicago Tax Day rally demanding that President Donald Trump release his tax returns drew large crowds of protesters who joined a half-mile march to Trump Tower on April 15, 2017. (John J. Kim / Chicago Tribune)”There’s so many reasons these records need to be released, most of all transparency at a time when public trust in elections is at an all-time low,” Quigley told the crowd. “We need to be as transparent and as accountable as possible.”Other speakers included Schakowsky, the Rev. Jesse Jackson and state Sen. Daniel Biss, a Democratic candidate for governor who is pushing legislation requiring presidential candidates to release their tax returns in order to be on the Illinois ballot.Husband-and-wife chemical engineers Carl Stevens and Kathleen Barton said they are among the 74 percent who believe Trump should release his returns but said their opposition is rooted in his rejection of climate change and science, something very personal to them.

Anti-Trump Tax Day march draws hundreds to downtown Naperville”It’s about a president who doesn’t read, doesn’t know what he’s talking about, spends all of his time watching television and playing golf,” said Barton, who attended the women’s march and plans to attend next weekend’s march for science in Washington, D.C.Terra Fairburn, a social worker with American Federation of State, County and Municipal Employees out of the Quad Cities, said she and her co-workers attended Saturday’s protest to push back against what she called an increasingly divisive agenda.”We’re pretty sick of the Trump policies, the hate, the fact that he’s not showing his taxes,” said Fairburn, 61, who travels with a group of women they call the Meow Meow Sisters. “We’re the baby boomers and we didn’t behave like this and now we’re in our 60s and we’re going to march every march.”Fairburn, dressed in a pink “kitty” costume, said she stood up hoping that millennials will pick up the torch of protest and continue the fight. “We want to set a tone for the other younger people. They can’t just sit and expect the boomers to fight all of these fights. They need to come to the table. They need to be part of this solution.”For one of those millennials, Aaron Straka, an advertising executive who lives in the River West neighborhood, not even a broken right foot would keep him from attending Saturday’s rally.Limping around Trump Tower on crutches, he sported his own homemade shirt that read, “Broken foot and still marching to see your taxes.”A supporter of Hillary Clinton, who won the popular vote along with 83 percent of votes cast in Chicago, Straka said Trump’s taxes will continue to be an issue to the millions who supported the Democratic nominee.”I think absolutely people care,” Straka said. “I think a majority of the people”.